Charly Bliss released  ‘Young Enough’ today. It’s the second album of this New York four-piece. With this album the band takes a huge step forward in their development. While their first album ‘Guppy’ contained predominantly brash punk songs, ‘Young Enough’ sounds more pop leaning. Meanwhile, the bands sounds more confident on this album. CHAOS Music Magazine had a chat with Eva Hendricks, Dan Shure, Sam Hendricks, and Spencer Fox about both the struggles and the magic of making music. Obviously, we discussed some of the songs on the album as well.

Congrats with your new album! The album is called ‘Young Enough. Can you explain why you chose this to be the album title?
Eva: The song ‘Young Enough’ is the centre piece of the album for so many reasons. It was a kind of a special writing process, getting that one out.  Once we wrote it, we knew what the album would be. The song is about perspective on growing up and looking back on everything and then realizing that you are very grateful, instead of really angry. It was a big shift for me between the two albums and in my personal life. I look back at things when I was twenty-two and I am only twenty-five now, but I think: ‘Oh, I can’t believe I did something that stupid!’ You get older and your perspective is always changing. 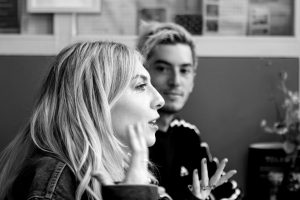 You are certainly open to change, because Charly Bliss sounds quite different on this album, compared with the previous one.
Sam: We didn’t want to write the same album two times in a row. During the writing process of the album, we were listening to a lot of pop music, so it naturally seeped into our song writing. We were always interested in experimenting with key boards and synths. We wanted to build on that and broaden our sound a little bit.

Obviously that had quite some consequences for all of you.
Dan: It’s true that everyone in the set plays a different instrument, at multiple times. It is not so much that the music changes; it’s the instrumentation that changes. There is more space and dynamic, and there are more levels.
E: The biggest misconception with the first two songs that we released for this album, ‘Capacity’ and ‘Chatroom’, was that we had swapped out guitars in favour of synths. I think people weren’t listening really, because there are tons on guitars on both of these songs. Obviously, there are moments where the synth is more the focal point, but there’s a forty seconds long guitar solo on ‘Capacity’.

Although the songs on ‘Young Enough’ have a poppy sound, many of the lyrics were inspired by a past abusive relationship of Eva Hendricks.
E: This whole album has been so cathartic. Writing the lyrics is how I process my own thoughts and experiences. It’s very private though, so the process of figuring out how to talk about these songs, and talk about them with strangers all over the world, was nerve-racking going into it. I think I’ve reached a different level of being comfortable with things that have happened to me. I feel if I am in control as opposed to feeling I am ruled by this one thing that happened to me once.

What song do you personally like slightly more than the other ones? 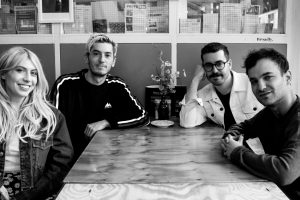 E: It’s hard to pick one. I really love the final song on the album ‘The Truth’. Lyrically, I am super proud of that song. I think it’s maybe the most disturbing song on the album. But it’s also really cathartic to listen to. It makes me feel powerful to sing it and play it. It is also a song with super high energy. It feels very true to who we are as a band. But also, it was another one that wasn’t working at first. These songs always feel like such victories when you figure it out. Once we recorded something, I forget that there is this long period of times where songs don’t work. They don’t sound cool and they don’t sound good, they don’t even sound like they’re heading in the right direction. But, you have this kind of manic believe that they will eventually be right. ‘The Thruth’ was a song like that for me.
S: I’m going to say ‘Young Enough’. It’s just makes me feel in a very special way. I can’t explain it. That was the song which was really challenging to write. It was the first time that Eva and I really were writing melodies together. When you’re working on a song and you know that there is something there, but you can’t get there. You try and you try, and it’s just not working. Ultimately, complete blowing up what we had worked on and turning into this over five minute piece that we are really proud of. It is special, because of the challenges of writing it and then being able to overcome these. I remember that feeling, of: ‘Finally yes, this is it!’ It is very rewarding.
Sp: I love playing ‘Bleach’, because it capitulates what people liked about ‘Guppy’. It’s energetic, a song with guitars. It’s also in some way a statement about what we’re doing right know. It’s both very classic Charly Bliss, but also very new. 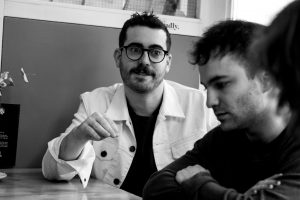 D: For me, it’s the song ‘Fighting in the Dark’. We had this really long day in the studio. Eva had this demo which was great, but we were like: ‘How and where on the album, and what is it going to be?’. Just right there and then we decided to make it an interlude. It reminds me that making music is unexplainable, it’s magic. So, listening to that song reminds me of that, and makes me feel very lucky about the whole process of recording the record.

It sounds as if you really need each other to overcome the struggles of song writing.
E: Absolutely, in every way! We all grew up together. Being in a band puts you into so many situations that are difficult and uncomfortable. It might sound cheesy, but at this point we are so intertwined in each other’s lives that there is no fight that we could have that would keep us from loving one another. I think that kind of trust is so fundamental to making music. Often I feel vulnerable sending a demo to other people. I respect all three of them so much as song writers, so when I send things over I think: ‘Oh, they are going to think I’m dumb’. Especially some of the subject matter on the album. To know that I’m with the three people who have my back, arguably most in the world is just really comforting. 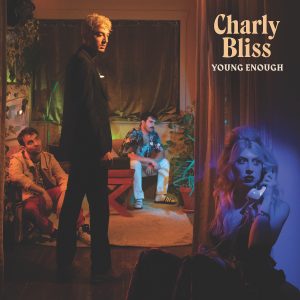