The wayward band Enter Shikari plays Jera On Air this month. Alongside with acts like Sum 41, Fever 333, and As It Is. Enter Shikari’s shows are a rollercoaster like experience, with a lot of energy and occasionally a moment of rest and goosebumps. CHAOS Music Magazine had a chat with guitar player Rory Clewlow and Chris Batten (bass guitar player) in their dressing room prior to the show in Tilburg last March.

Musically, Enter Shikari uses much variation in speed, dynamics, vocals, and instrumentation, resulting in a kind of chaotic music. We love chaos, but do Chris and Rory agree with this observation?
Chris: That our music is chaotic? Yeah, I guess certainly the earlier albums were. Earlier on, we wanted to be the craziest band, or the noisiest band and the most technical band, just to try and push ourselves. We wanted to make sure we stood out. So yeah, there are definitely very chaotic moments in the set. But our recent album has definitely been a bit calmer. 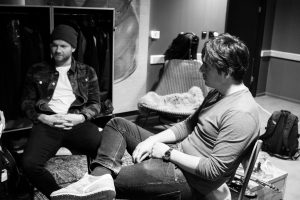 Rory:  We tried to simplify song structures. In the past, we would have ten ideas in one song. So, we try to strip that back a bit now. We just try to make good songs, but yeah, I used a lot of the chaos as well, as you call it. It comes from just growing up in such of a diverse music scene where we would have all different types of music and we’re fans of all of them. They all see into our influences and shape our music to be very divers.
C: We all listen to lots of different music. We had a very thriving scene around from where we grew up. We had a local venue, in a youth club called The Pioneer Club. We were lucky enough for the bands who took the effort to come around and play. We started a promotions company with the aim to book the bands we wanted to see. So it’s just always been a big part of our growing up.
R: There were lots of points in our career where we discovered new music. The Prodigy, Radiohead and Muse, in their very early days. They all sort of shaped how we sound.

You mentioned that The Spark is musically a bit calmer than the previous albums. To me, the change seems quite huge. Can you tell me something about this process?
R: We’ve always had songs on albums that were a bit like The Spark. We thought with this album: let’s just have a sort of vision. Normally, we just wanted to do everything we could, to show all aspects of us. This time, we thought we don’t have to prove ourselves anymore. So we just tried to make a great change.
C: Yeah, just focus on the songwriting. We got quite scientific with our previous albums. We would have a kind of scale for melodic to frantic, soft to heavy. So, we kind of made sure we had everything covered. With this one it is quite the opposite.
R: In the past, making music has been intuitive to us. Just write how you feel and then piece it together to make an album, to make sure all the areas are covered. But then with this last album, I guess it is a little bit more thought-out, a sort of stay on track kind of thing.
C: I remember when Rou (Reynolds) came for the first time with his demo. He’d never really said to us before that he had a real vision for it. He came with ‘Live Outside’, and you could see very much that there was a formed kind of direction in his head.

It sounds more at ease
C: Hm, I think we became more confident. And for the first time Rou was more confident with opening up in his lyrics. Before, they’ve been based on large social issues, but not so much on the personal stuff. This album was a lot more personal and I think that directed the music into being a bit more, not simplified, but passionate.

You mentioned the lyrics, do you consider it important that your audience understands these lyrics?
R: I don’t know, I guess we all feel differently about it. For me, as long as people come and enjoy the music, that’s fine. If they get the lyrics and sort of delve into the lyrics, that’s great, because I think that Rou is amazing in writing lyrics. He writes about really interesting subjects. But if you don’t listen to the lyrics, that’s fine, just enjoy the music. As long as you listen to the guitar! (laughs)

Do you already have an idea of the direction your music is currently going?
R: We are at the end of this album cycle. We’ve got this tour and we’ve got ahead of festivals over the summer. There are ideas, Rou’s been working quite hard on ideas. It is still a little early days to tell. It can’t be too far from ‘The Spark’, it will probably not be as big a jump as after ‘The Mindsweep’.

C: Perhaps one thing people might find interesting is that we are thinking about the next recordings and for the first time we will self-producing it. We’re very excited about it, because it gives you even more control.

Why have you decided to do so?
C: I think it is because we’re all confident enough now when it comes to production. If we have an idea we want to quite quickly have it out rather than have to explain and translate. Not that anyone with we’ve worked before is limiting us in any way, but we want to work how we want to work.