Tomorrow, The Japanese House (aka Amber Bain) will finally release her debut album ‘Good at Falling’. Just like the previously released EPs, the album is co-produced by George Daniel, from The 1975. CHAOS Music Magazine met Bain and asked her about her album and about how she hates the moment when she doesn’t feel inspired.

Congratulations with your album ‘Good At Falling’

Thank you. I’m really proud of it.I just worked on it song by song rather than as a whole. So I didn’t really knew how I wanted it to be before I recorded it, I just knew if i liked it or not. It was only going to be finished when I liked it so I just kept working on it until I liked it.

What song of the album are you most proud of? 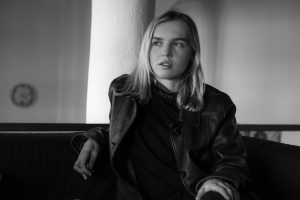 Maybe ‘Follow My Girl’, because I really like that song and the sound of it. Also ‘Saw You In A Dream’. That is my favourite song probably. It is a conclusion of the album, I don’t really know why. It just made complete sense to put it at the end of the album. It sounds like it is the last song on the album, doesn’t it? It is a different version of a song I already had so, it kind of made sense to put it there. It definitely feels like somethings coming to an end.

One of the songs on the album that stand out is ‘Marika is Sleeping’. Can you tell me how this song was created?
I woke up and had the string arrangement in my head. Originally it was an orchestral idea. I added the lyrics a few months later and then I just kind of fiddled around with it. That was probably one of the the songs that took longer to write. I don’t know why it was like that. If I knew the answers to this I’d probably write a lot more songs.

Can you tell us something about how you create your songs?
I usually record and write at the same time. Sometimes I’ll have a lyric idea and then work around that, or sometimes I’ll have done the production of the song, or the sound, and then I’ll write a song around that. Another time I write a song on the guitar and then record it. Songs definitely evolve over a long period of time. Well, sometimes I’ve written a song in two minutes and sometimes I write half the song and come back to it in two years or four years and then finish it. I don’t know if anyone really knows the process of writing a song. 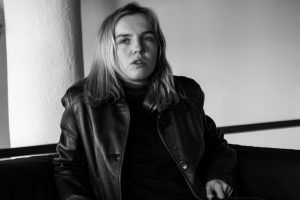 It’s a kind of a random and a weird process for me. You have to wait to have things right and I only know that it is right until it’s released, or until I have sent it off. Until that point I’m just picking my head out. So, now the album is released I can move on. It is a relief.

You co-produced the album yourself, together with BJ Burton en George Daniel. Can you tell me something about the recording process?
It is not really a direct process. Every song is completely different. A lot of the songs are mostly done with my laptop. We recorded vocals in the studio. One of my favorite part of it is the production; getting the general sound. There are lots of layers in the songs, harmonies. That is the part that is enjoyable for me, seeing what will work with what.
The hardest part for me of the production process is probably just finishing stuff. I don’t like to stay on one thing. I love to do lots and lots of different things. Probably the hardest part of co-producers BJ and George is making me do one thing.

Listening to ’Good at Falling’ the listener might get confused, because the topics of the songs are dark and serious, while the music is light and poppy. Did you deliberately choose to use this contrast?
No, nothing about how I write songs is deliberate really, I guess it’s just my taste. I like pop music and I like the major chord sequences and weird chord sequences. But it is true, the music is not really grungy or dark; it’s more like bright. Lyrically, I like writing about things that move me. I don’t think I could write a happy song. I don’t purposely write sad songs, it’s just what comes out. 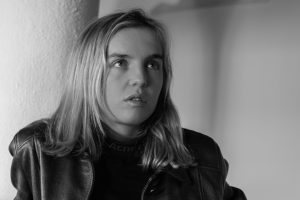 What inspires you?
When I find a piece of music that I really love, that can inspire me. Then relationships, with people and myself, films…. It is impossible to tell what inspires you and what makes its way into your music. I wish I knew exactly what inspires me because then I wouldn’t lack inspiration. I would know exactly where to go to. Probably the things that I hate inspire me too. In a way that I don’t want to be like that.

That sounds like you regularly lack inspiration.
Yeah, I think it is very hard to feel inspired all the time. I hate it when I don’t really know what to do with myself. When I do feel inspired I write lots. There are definitely moments where I am like: I don’t have anything to say and: I don’t want to write new music now.
I don’t like it when I don’t feel inspired. I can’t relax because time off for me is writing time. So it feels like I am wasting time. And it also feels useless, like: what’s the point of my existence if I’m not writing music. It is the only thing I really add to the world anyway.