We saw the Irish alternative rock band Otherkin in Rotown Rotterdam in 2017, after the release of their album ‘OK’. The show was so energetic and smashing, that we felt sorry for the people who missed it. Since February, Otherkin releases new material. Starting with ‘Tombstone’, which is now followed by ‘All That Remains Won’t Be the Same’. Otherkin is one of the bands lining up Club Achtung! on May 3th, in Q-Factory Amsterdam, alongside with The Vices, Annabel Allum, and many more. Looking forward to this evening, which will be full of sparkling energy, we had a chat with Luke Reilly, singer from Otherkin.

How have you been doing since we saw you in 2017?
We’ve been doing well. We toured all around Europe following the release of the album. Then we came home and started writing again and talked about where we wanted to go with the music. 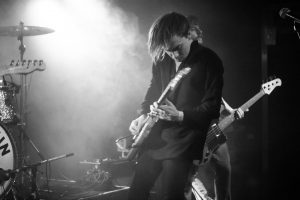 I think we hit to a wall when it came to the song writing. We’ve had a few songs that we’d written. At one point we looked at what we had and looked at ourselves. It was a case of knowing that they just were not good enough. So we decided to ditch them all and started song writing again. We were falling into our old pattern of song writing, and I think we got a bit lazy. The four of us would meet in a room and bash out an arrangement together, to see what we came up with. This time we decided to write our ideas individually and then we recorded them together in the studio, using a lot of different instruments. We had to really indulge ourselves and make a kind of music that is different from what we’ve done before. That wouldn’t necessarily be in our comfort zone as well.

A whole new approach of song writing, and using different instruments; did you have any moments of doubts?
I actually felt a lot more confident with these songs because I feel we put more kindness, more care, and more attention in them.
‘Tombstone’ is the first song you put out this year.
We wanted the first release to be quite dramatic and quite loud. But we have elements in our music that people might have liked about our previous album as well. It’s not too much of a departure; we didn’t want to scare everybody off. It has got different kind of instruments, different effects that we never would have used before, but it is still very much a guitar song. A lot of other songs that we are going to put out aren’t so much guitar songs. The first thing a lot of people noticed is that it sounded quite different from what we usually do. People reacted really well to it and they liked the production of it. That was a big thing for us because we were quite involved in the production of the song and the recording of the song. 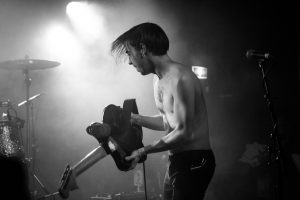 Two weeks ago you released another song; ‘All That Remains Won’t Be the Same’. Can you tell me more about this one?
The song was written around the time when a lot of the abuse stories by man of power were coming to light. The meaning behind that is the post me too world now. That kind of behaviour is no longer going unchallenged. From a lot of peoples’ perspective it is refreshing because a lot of people, especially women, experienced awful suffering. It was just something that was on my mind a lot.

Did you have a specific situation in mind when you wrote the song?
We did have a situation in 2017. We played a concert in London and after the show this girl came up to me and told me that she had been groped when she was in the mosh pit in our concert. I think a lot of men can be very ignorant to these things that happen on an everyday basis for women. I myself I think I was included in that group of people. I wouldn’t have thought it would happen at our concerts, but it did. This direct experience, made me look at myself and consider my thoughts on that too. We we’re writing songs at the same time and the lyrics just came into my head.

At Club Achtung! you’ll line up with The Vices , who supported Otherkin during your tour in the Netherlands in 2017.
Yeah, they are a great band. We hit off quite well and they are lovely guys, so we’re looking forward seeing them. Also other bands which are great will be playing as well; Annabel Allum and LUCIA. So I think it is going to be great.

Indeed the line-up is great. In our opinion however, everyone should definitely come and see your show. Time for some promotion: how would you advertise for Otherkin?

I would say if people want to come along for 45 minutes with a lot of energy, speed, and good times, then we’ll probably a good band to come meet. Every time we play we’re keen to make sure that there is a lot of energy and activity from ourselves on stage and in the crowd because that is our favorite thing of playing live.

To conclude your self-promotion: what song describes Otherkin best?
I think ‘Tombstone’ is actually a good indication of the band because it has heavy guitar elements, but also a melody. We’re quite a melodic band. We love pop music and dance music too. We like to let that come across in our music. This song has that kind of balance, being a rock band and being a band for people who like dance music.