We came across the band Sick Joy in London, where they supported Big Spring. Sick Joy is definitely a three piece band, guitar player Mykl Barton and Bass player Danny Pitson are the two permanent band members. Impressed by their nineties inspired and energetic music, we wanted to learn more about the band and introduce them to the Dutch audience. Luckily, Mykl was willing to have a chat with us.

You were born in North England, in Newcastle, but Sick Joy was founded in the south, in Brighton. Please, tell us about this remarkable start.
Obviously this is just our experience, but it was quite hard doing the music that we did in Newcastle, at the time. I love Newcastle, we’re a Newcastle born band, but the thing we were doing didn’t seem to have the fit right in the city, for the most part. At other places where we played, people seemed to soak it up a bit more and got more involved. Maybe we just needed a fresh start. It’s a combination of stuff, I think. Every city has its own sound and at the time Brighton aligning. Me and Danny (Pitson), the bass player, moved from Newcastle about two and a half years ago. We drove down to Brighton in a van and just started from scratch. The music scene was super alive. We recorded some demos and moved from there. We’d been playing for about a year as a new band and met our manager. He helped us get our feet a bit more on the ground in the south outside of Brighton.

You needed to move out to develop
Yes, not only as musicians, but as people as well. It was a good experience to move as far away as we could from one end of England to the other end of England. We had a couple of friends, but we didn’t really know anybody down here, so it was cool. We just got to be who we were without any lingering past.

How did you came up with the band name Sick Joy?
It’s from an old nineties movie. When I heard it , I thought it sounded cool and made my own interpretation of it. 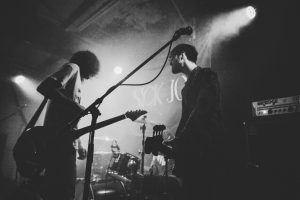 I read somewhere that you chose the title ‘Amateurs’ for your EP because of its original meaning, which is doing something for love. I related it to your band name. Does that make sense to you?
Yeah, it kind of does. We were in Germany with some friends recording some demos, really early on before we even had a gig. I found out from a guy over there that the word amateur comes from the latin word amor, which is for love. So, if you are a professional, you do it for money, if you’re an amateur you do it because you love it. I think I’d prefer to be an amateur. But maybe earn enough to pay my rent too.

You obviously love making music. What is the thing you love most about it?
The escapism. When I write a song, it is easier to communicate things you didn’t know how to. Or to communicate things you didn’t even know yourself. It comes out in its purest form in melody, I think. It’s not even necessarily just with lyrics, it could be in everything, the drum beat,guitar line or whatever. It takes you away from yourself. You find out who you actually are, how you feel about stuff. You say things through music you can never say in person to another person.

When you write music, do you start with a feeling you want to express?
Yeah kind of, the feeling is decided as it comes out. The lyrics are last. I’m pretty lazy with lyrics. I think, when you think too much, you just fuck it up. The first ones that pop into your head are normally the best. The melody is the most important thing.
I’m writing stuff at home all the time, then I’ll take it into a room with the guys. Normally when I bring a song in I’ll explain either the influences behind it, or I try mangle my words to the guys without sounding too sappy. But I don’t say too much, so they can put their own thing into it. Whatever Danny is dealing with, at that point will hopefully bleed into the song at the same time, in his own way. Whatever the drummer is going through, or whatever he’s listening to, will gradually come into the song as well. It will all blend into one. When you’re playing something through, you know it within the first five minutes if it’s a good song. It’s when you finish playing, no one really says anything, but you’re just like: wanna do it again (laughs). It’s like an unspoken thing.

Your songs all seem quite serious.
Yeah, I guess. It just doesn’t come naturally to write a super positive song. It’s normally dealing with something you’re thought about, or want to communicate, like I said it. It’s cathartic to get it out. If you’re feeling something good, you don’t need to get it out. I’ve never been good at that kind of thing. I’d like to try though. I’d rather the person listening to decide what they want, about what it means.

So, what’s coming up for Sick Joy?
We released our single ‘Shoot Your Lover’ a few weeks ago. We’ve just signed with SO recordings, which is our favorite Independent record label. So many bands we admire or love are involved with them, and they are really nice guys. Hopefully we’ll bring another single out in the summer and then a full EP by the end of the year. We got a few festivals over this summer as well. Not too many and just a few random shows. But mainly we’re just writing.