The career of The Murder Capital takes flight. The band impressed at Eurosonic earlier this year. A remarkable fact is that the bands’ fame comes mainly from their impressive live shows. The Murder Capital released only a few songs (‘Feeling Fades’ and ‘Green & Blue’). This August, the debut album ‘When I Have Fears’ will be released. CHAOS Music Magazine caught up with singer James McGovern and guitar player Damien Tuit. Of course we wanted to hear everything about the forthcoming album, but we also wanted to discuss the impressive performance during the Metropolis Festival in Rotterdam the other week.

You played at Metropolis Festival in Rotterdam last week. What struck me most was the performance of ‘On Twisted Ground’. This song is quite intense. You seemed also quite emotional at the end of the song.

James: Yes, it’s quite a personal song. My best friend took his own life last year. That was right in the middle of the moment the band was forming. We’re sort of trying to understand that situation and trying to grow up with something like that. It is an integral vein in the body of our work. This song is the first time I tried to write about that situation directly. I think it can be applicable to any sort of loss. People can apply things from their own lives to it. When we went to record this song, it took a different form. It changed a lot from what it was used to be. Every time we play it, we improvise so it is different every time. That’s exciting for us. But yeah, it can be a difficult song to sing. Meanwhile it is cathartic as well.
Damian: Now that we play more shows, it becomes more natural. We can play songs differently each time, which makes the gig fresh for everyone, for us and for the audience. I think it was just happening at that moment like you said, when we played it that day it was different from the day before.
J: With all those songs it’s like classical music; it is read from notes, but it can still be improvised by the way they are playing it: all the dynamics and the tempo.

You only started about a year ago and you have achieved so much in that period of time.
J: The current line up is close to a year anniversary. But it’s been very short, really.
D: We’ve been together for a year and a half, all together really a year. It’s a kind of crazy how similar people we are, how we were able to find each other.

On August 16th your first album will be released.  Can you tell me something about the recording process?
D: Because our live shows are so integral to what we do, we kept that very much in mind in our recording process. Everything was recorded live to tape. By recording it live to tape we gave it a live feeling and obviously allowed it to breathe. Having it on to analogue makes it a little more human and imperfect. If you want it to be honest, it just has got to have that sort of stuff in there. It has to be naturally imperfect. When we are playing live there’s always a moment where it’s like all is going to fall apart, that’s what makes it fun.

How was it for you to work with Flood, who has previously produced albums with Nick Cave and the Bad Seeds, Smashing Pumpkins and New Order?
D: He has done some of my favourite albums ever. Every time the idea of making an album got into my life, I wanted to work with a producer who was an artist in his own right. And that was exactly what he was. When we met him, he was the most down to earth, humble, and intelligent guy. It was a pleasure to work with him.
J: Totally. He really understands peoples’ individual needs, which makes doing such a big project a lot easier. He is just an amazing prompter of your own self-discovery, as well in your own music as in your personality.

How can we hear his influence, apart from the fact that you are still friends?
J: In the record. It is all over it. We all cut our hands open and shook. We all shared whatever the fuck we all had.

When media write about The Murder Capital, references like Shame, Idles, and Fontaines D.C. are often used. Still, listening to the songs on the album it sounds like you already developed your own sound.
D: It is our own.  To have our own sound was always extremely important to us. It is kind of an obviously thing, but there are so many bands out there, you just hear.

You’re a Dublin based band, how does that influence your sound? 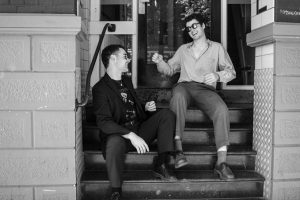 J: Living there, I’m sure it does. If we were living in Amsterdam our album would sound different. The cities have different moods. Just by the surroundings, by the Irish weather or by the architecture. Dublin can be quite grey.
D: Like riding through an industrial estate. It’s the sort of building were work’s going on, there are cranes in the distance. I think that being the last thing you see before you go into a room that will always affect what you make. There are lots of different avenues you can go there in a creative way in order to express what you need to. It is probably a greater effect I think, because we are all men in Dublin and we are all living in the city.

Since your songs involve serious themes the lyrics in these seem to be quite important. What comes first, lyrics or music?
J: It’s both, really. When I look back the majority of the times, the words were there before the music was written or they were written completely separately. But there are a lot of circumstances where it’s improvised in the rehearsal base.

Does creating music help you to overcome the difficult moments in life? 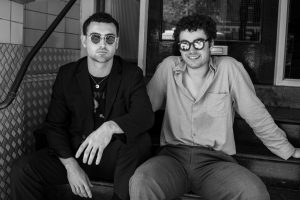 J: I think that’s why we all do what we do. That drives us towards making music. It is such a healing process.
D: Then touring is interesting in itself. Because of the repetition which has its own beauty as well.
J: If you are on tour it is interesting how the day can be dull monotonous, with just a motorway and then you get there. Then all of a sudden you’re in that hour, or 45 minutes, just together with the same five people again.
D: It is beautiful; you just take it for what it is. When someone is enjoying your show, you don’t get your validation from it.
J: I am just almost spiritual about playing a gig. I mean, the same song you crafted over with your five best friends and then a gathering of people comes and enjoy it.
D: It’s like going to any show. I love that feeling of community when you see someone play. It is so cool to be able to have this great experience.
J: How lucky we are! 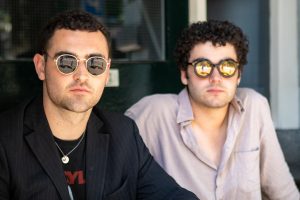